Valorisation of insect frass as fertiliser – an overview

On this page, we aim to guide you through the key documents of relevance for the policy file ‘Insect frass’, by answering the following questions:

What is insect frass?

What to expect in the near future?

What is insect frass?

Insect frass is the common name used to describe insect larvae faeces or dejecta. On 29 November 2021, the European Commission adopted a legislation – i.e. Regulation (EU) 2021/1925 – which regulates the production and placing on the EU market of insect frass (for further details, see section ‘Is insect frass regulated at EU level?’). This legal text also includes a definition:

Insect frass contains certain beneficial bacteria that act as plant growth microorganisms, improving plants’ health and facilitating their absorption of nutrients. Having an interesting NPK profile (nitrogen, phosphorus and potassium), it has a great potential to be upcycled as fertilising product (e.g. organic fertiliser, compost material or soil improver). Frass could also be implemented as biogas.

Similar to compost or other types of animal manure, frass contains relevant nutrients and micronutrients, as well as chitin, which could stimulate the growth of beneficial bacteria in soil. These properties make frass a valuable solution for farmers active in crop production (e.g. vineyard producers) or by gardeners across the EU, who can incorporate insect frass as part of their fertilisation strategies (see the IPIFF contribution paper from September 2019).

Regulation (EC) No 1069/2009 on animal-by-products (later referred to as ‘EU ABP legislation’) defined ‘manure’ and specifically regulated its conditions of use (e.g. as organic fertiliser or for other ‘technical applications’). While ‘insect frass’ was not legally defined in this text, several national competent authorities considered that such products should fall under the ‘generic category’ of ‘manure’, so its conditions of use were aligned with those foreseen for other animal manures. Its legal status remained uncertain in many other EU Members States.

Adopted on 29th November 2021, Regulation (EU) 2021/1925 defined EU baseline standards for the production and placing on the market of insect frass as organic fertiliser. The legal text amended Annex I and Annex XI of Regulation (EU) No 142/2011 accordingly, by aligning the heat treatment process standards for the placing on the market of frass with those applying to processed animal manure. More specifically, frass treated at least 70 degrees Celsius for one hour will be required for the placing on the markets of EU Member States, in line with the national authorisation procedures.

The creation of EU standards for insect frass plays a key role in harmonising the processing standards in the Member States. Operators from across the EU shall now comply with the time/temperature norms, as well as with other standards put forward by Regulation (EU) 2021/1925 (e.g. complying with the dead insects threshold on mass and volume and the microbiological threshold) when seeking authorisation – before their national competent authorities – for using insect frass as organic fertiliser.

National competent authorities may have authorised the use of national measures for the processing of frass (e.g. the concerned authority may have authorised a different time/temperature combination). So while the entry into force of these standards is immediate in all the EU Member States, operators approved or registered in a Member State, applying such national measures, will benefit from a transition measure. They will have the possibility to apply the nationally approved processing methods until 8 November 2022.

What to expect from the future?

Building on the good practices implemented at farm level, while taking into consideration latest scientific knowledge, the European insect sector is committed to working on further optimising processing techniques of insect frass.

IPIFF remains equally interested to explore the possibilities of creating further specifying or adjusting the above-described processing requirements to create standards that are more tailored to the specificities of insect frass products Such a step would indeed allow enlisting insect frass under the Component Material Category (CMC) 10 included in Regulation (EU) 2019/1009 on fertilising products (i.e. the creation of EU ‘generic’ standards/category for insect frass under the EU fertilising products legislation would contribute to smoothen national authorisation procedures and allow free trade across the European Union). 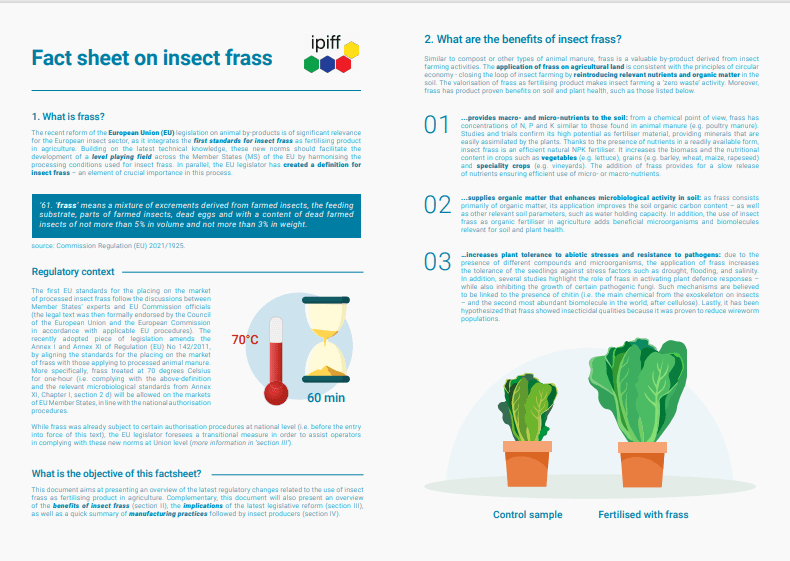 IPIFF Contribution Paper – The application of insect frass as fertilising product in agriculture;

Press Statement – IPIFF welcomes the entry into force of the Commission Regulation (EU) 2021/1925 which included a definition for ‘frass’ derived from farmed insects.

We use cookies on our website to give you the most relevant experience by remembering your preferences and repeat visits. By clicking “Accept All”, you consent to the use of ALL the cookies. However, you may visit "Cookie Settings" to provide a controlled consent.
Cookie SettingsAccept All
Manage consent

This website uses cookies to improve your experience while you navigate through the website. Out of these cookies, the cookies that are categorized as necessary are stored on your browser as they are essential for the working of basic functionalities of the website. We also use third-party cookies that help us analyze and understand how you use this website. These cookies will be stored in your browser only with your consent. You also have the option to opt-out of these cookies. But opting out of some of these cookies may have an effect on your browsing experience.
Necessary Always Enabled
Necessary cookies are absolutely essential for the website to function properly. This category only includes cookies that ensures basic functionalities and security features of the website. These cookies do not store any personal information.
Non-necessary
Any cookies that may not be particularly necessary for the website to function and is used specifically to collect user personal data via analytics, ads, other embedded contents are termed as non-necessary cookies. It is mandatory to procure user consent prior to running these cookies on your website.
SAVE & ACCEPT